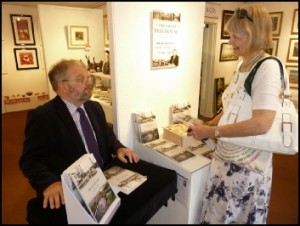 Prominent local historian Chris Helme will be giving one of his entertaining talks on the wartime history of Brighouse, including a wartime tea all for only £5

Chris Helme – for thirty years he was a serving West Yorkshire Police Officer and was awarded the British Empire Medal in 1990 for his service in the community. He has written five local history books, and written a weekly nostalgia column for his local newspaper the ‘Brighouse Echo’ weekly newspaper for over twenty five years. He has produced a sixty-minute nostalgia cassette tape based on a number of the stories from his column. He has also written a number of articles which have been published in UK regional magazines.

For over twenty five years he taught local history to Adult Community Learning classes. In recent years he has taught older users the mysteries of the mobile phone, classes he has been presenting for almost five years, and more recently classes in very basic computers skills for older people. Classes that are very popular.

During the mid 1990’s he was beginning to be in demand as a speaker, and has now developed a style that will both inform and entertain.  His presentations have often been described as ‘Infotainment’.  He has developed a presentational style that can both conjure laughter and melancholy through his various subjects that have been appreciated by many local groups through the county  and has become a regular speaker at Luncheon Clubs.

Talk starts at 2pm until 4.30pm ish and includes and interval for you to enjoy your wartime tea

You can buy tickets in several ways